You are here: Home / Tribute From Brian May

SIR PATRICK MOORE, FRS.  –  a tribute by Brian May 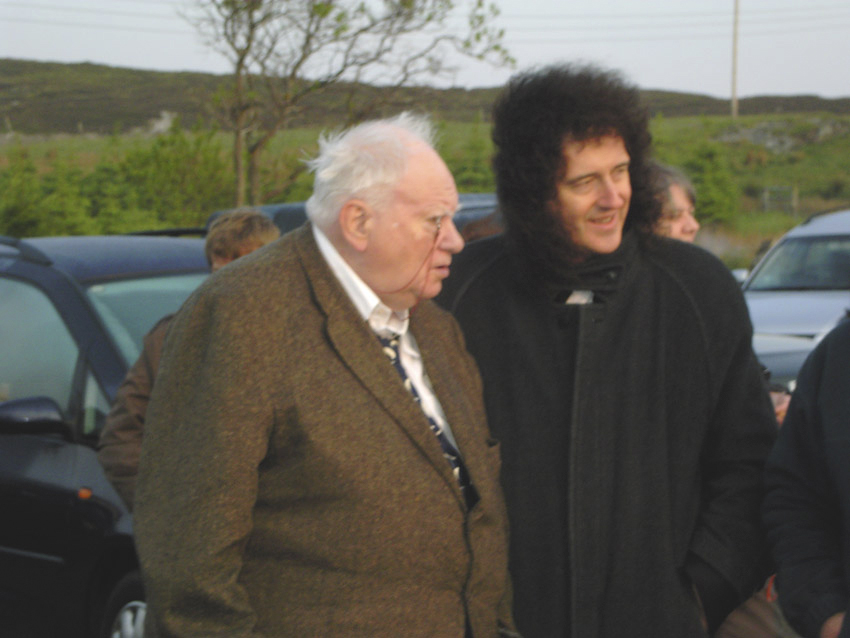 For many years Patrick has been a dear friend and a kind of father figure to me. I am going to miss him terribly, as are all his close friends and colleagues; and the world has lost a priceless treasure, that can never be replaced.

Patrick was the last of a lost generation, a true gentleman, the most generous in nature that I ever knew, and an inspiration to thousands in his personal life, and to millions through his 50 years of unique broadcasting. It’s no exaggeration to say that Patrick, in his tireless and ebullient communication of the magic of astronomy, inspired every British astronomer, amateur and professional, for half a century. Most astronomers I know will tell you that Patrick is the reason they first looked through a telescope. Through his countless books and articles and TV appearances, he somehow captured the adventure of the Universe and brought it to us. He knew the Universe in a way which will never be equalled. Patrick did not just know the facts – it was as if he lived out there, could find his way around it – knew it like the back of his hand. To the very end of his life he was actively distilling new discoveries into channels which made them not just accessible to astronomers, but also understandable to the general public – a rare gift, which he never tired of using to the full.

In his private life Patrick was astoundingly giving.  His dedication to young aspiring Astronomers was legendary. He replied to every letter, responded to questions, helped young students with gifts of equipment, and the most precious gift of all – his time. He personally tutored some that he thought particularly promising, and sponsored others through higher education; in general, he gave away any income he ever made, to the point where he had no security himself, except that which his friends supplied.  He was honoured by many Universities with degrees and fellowships, and, though he always insisted he was an amateur astronomer, his contribution to pure research was considerable. He made the first finely detailed map of the Moon’s surface, which was the one consulted by the first Astronauts to walk on it. From the days before astrophotography was well developed, his notes and drawings from his thousands of hours of pure observations are now a valuable archive.

Patrick was also a great caring human being, and a campaigner for the rights and welfare of animals. Privately, his cats were the loves of his life, and in public he was outspoken against cruelty of all kinds.  His demolition of Theresa May’s defence of Fox Hunting on a TV program is legendary. More recently he spoke out against the government’s proposed massacre of badgers, and attempts to repeal the Hunting Act.

Patrick had other talents too.  He was a life-long devotee of cricket, and bowled a mean googly in his day. He was an accomplished musician, played both piano and xylophone with great success in public, composed music for these instruments, and also for brass bands, much of which was recorded. He wrote science fiction novels, plays, spoof operas, and satirical commentaries on the foolishness of bureaucracy, under the assumed name of R.T. Fishall. He enjoyed good-naturedly ribbing those who believed in flying saucers, or Astrology, but had an open mind as to whether intelligent life might exist elsewhere in the Universe.

The honour he was most proud of was being made a Fellow of the Royal Society – the only amateur astronomer ever to achieve this distinction, but he was also made a knight of the realm in 2001.

Patrick will be mourned by the many to whom he was a caring uncle, and by all who loved the delightful wit and clarity of his writings, or enjoyed his fearlessly eccentric persona in public life.

Patrick is irreplaceable. There will never be another Patrick Moore.  But we were lucky enough to get one.