You are here: Home / The Cosmic Tourist 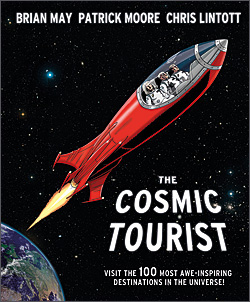 VISIT THE 100 MOST AWE-INSPIRING DESTINATIONS IN THE UNIVERSE

Join three of the world’s best-known astronomers on a journey throughout the universe, stopping off at their favourite sights!

Take your seats for the greatest tour ever – one that encompasses no less than the whole of the Universe. En route, we stop off to gaze at 100 amazing sights – from asteroids to zodiacal dust and from orbit around the Earth to beyond the most distant galaxies. We start right here on Earth, with your tour guides: the three intrepid cosmic voyagers Patrick Moore, Brian May and Chris Lintott. They explain the sights, what they are, and how they fit into the astronomical zoo of familiar and curious objects and phenomena. The trio express their own personal enthusiasm for each marvel you encounter. The images present the extraordinary beauty of the Universe as seen through the eyes of the biggest and best telescopes on Earth and in space, and occasionally in the backyards of expert amateur observers.

Featured sights include earth, the moon, Mercury, Venus, the Sun, Mars, Asteroid belts, Zodiacal Dust, Jupiter, Saturn, Uranus, Transneptunians, Alpha centauri, Betelgeux, the centre of Milky Way, the edge of the Universe….and many more wonderful destinations far beyond your reach. The astronomers even teach you how to view the Universe for yourself.

Bang!,by the same authors, has sold over 100,000 copies, in thirteen languages, and in three editions, since first publication in 2006